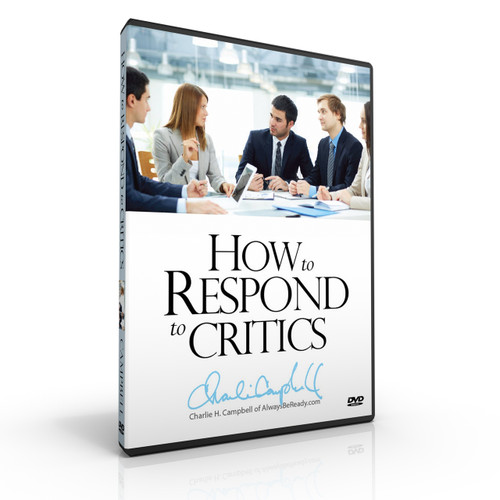 Critics of Christianity commonly say:
These are just some of the statements that commonly leave Christians speechless. In this video Charlie Campbell lays out a strategy for dealing with these kinds of assertions: asking the critic questions! Questions like: What evidence do you have? How did you come to your conclusion? and others. Many have found Charlie’s Scriptural advice on this issue revolutionary when it comes to talking with nonbelievers. Length: 58 minutes.

This video was formerly called "My Top Five Questions for Skeptics" and "How to Expose the Faith of Atheists, Skeptics and Critics."
×

Apologetics Quotes: Words That Will Strengthen Your Faith & Equip You to Answer Critics of the Bible

Answers to the Tough Questions About Hell (DVD)

Defending the Faith: What is apologetics and why is it so important? (DVD)

Overcoming the Fear of Evangelism (DVD)

Islam: An Overview of the Second Largest Religion in the World (DVD)